Sipping tea in my t-shirt, I contemplate the structure of a particular analysis for an evaluation I am working on. I glance over at the window boxes brightened by the morning sun, then adjust the back cushion I bought recently. The sofa wasn’t really made for “office” use. I get up to check that my daughter is up and readying for her first day of virtual school. “What’s for dinner?” she asks me… 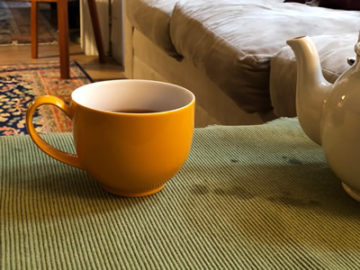 When Covid sent those of us home whose jobs were suited to it we entered a mixed-up world. There were upsides, to be sure. Aggravating commutes and exhausting business trips were set aside. We gained some flexibility in how to spend the day, running out for a quick errand now and then, and always available for a child’s question. Home is more informal than the office, and generally more peaceful.

But in time the downsides have become clearer, too. Work never seems to stop. Emails arrive well into the evening. A recent Harvard/Stanford/NYU study reported on in The Economist (9/12/20) found that the average workday during the Covid crisis is 50 minutes longer. Many people feel isolated and miss interaction with co-workers.

While home-based work is largely working for employers, the diffusion of management authority and weakening of institutional culture are concerns. Some employers are finding that they are losing talented employees who are having to choose childcare over career. And most wince at the thought of costly empty office spaces.

We’ve learned a great deal about the value of the office from this crisis. But it’s also been demonstrated that people don’t need to go an office every day, all day, for an enterprise to function productively.

Many organizations have deferred a return to the office into next year. What might the future look like? Three years from now, will it just be business as usual? Or will organizations find a new way forward that satisfies their workers, saves money (by reducing office space and travel), and improves institutional effectiveness?

As you consider these questions in your own context, here are a few emerging trends noted by The Economist:

• Bringing staff together at set times on some regular basis (measured in months or weeks, not days) to build relationships and share information. A recent Carnegie Mellon study showed that “bursty” interaction such as this produced better results than ongoing co-location of disparate disciplines (e.g., incubators or co-working spaces).

• Some companies are providing workers with video messaging software (Loom) so they can share ideas and stay in touch “asynchronously,” fostering a greater flow of communication than the rigidity of planned Zoom calls.

• Experts expect investment in better cameras and microphones, and in new kinds of software that varies, improves, and enlivens virtual exchange.

• There will need to be changes in employment law. For example, if you injure yourself at home while working, is your employer liable?

Hard choices and hard work lie ahead. But institutions that fashion solutions that generate benefits to both the organization and its workers, while managing the costs to organizational culture and worker work-life balance, may well outpace and chart a path forward for the rest of us. 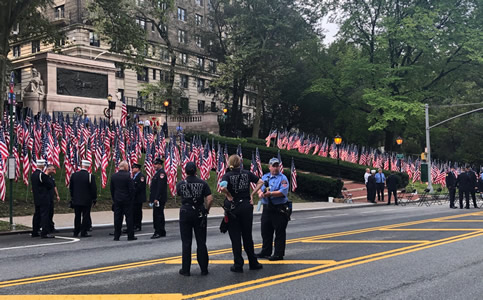 As I emerged from the park halfway through my morning walk a couple of Fridays ago I noticed Riverside Drive had been blocked off. The mournful sound of bagpipes drifted down the quiet street. As I neared 100th Street I saw a small field of American flags arranged around the base of the firefighters memorial. Firefighters in dress uniforms chatted in clusters in the empty street before the ceremony. It was September 11th.

The men and the flags brought memories to mind. That awful morning, my wife and I each walked the five miles uptown hurriedly, passing bar crowds gathered around loud TVs that spilled out into the street, as fighter jets circled overhead. We reached daycare at about the same time, picked up our fourteen-month-old boy, and headed to Riverside Park. There was a need to be outside that day. In time the breeze shifted and a deeply disconcerting odor infused the air. We headed back to the apartment.

Something in the panic and profound sense of loss the memory had recovered paired with the current Covid moment. As I scanned the firefighters on Riverside, at first I felt empathy and thought, I’m sorry. And then, in the next moment, I thought, Why aren’t they wearing masks? Not for me really. I was plenty distant. For one another.

Superficially, their behavior seemed to have a kind of rules-don’t-apply-to-us (bureaucratic rules, biological rules) arrogance about it, though I wondered how many of them wanted to put on a mask, but were intimidated by a tone set by others. My thoughts broadened. What had nearly two decades of 9/11 hero projections (now diffused over even firefighters who were in grade school back then) done to the firefighters’ ability to behave as humans in a health crisis, rather than to pretend to be the gods we wished them to be?

Non-mask wearing endangers brethren, families, and local citizens firemen come into contact with daily. It makes no rational sense. Plain irrationality always attracts my curiosity. What instincts in society were the firemen satisfying by not wearing masks? What dynamics disabled FDNY leadership to the degree that non-mask wearing was the norm here?

Of course these sorts of oddities flow and ebb through most institutions, and I often wonder about the collective anxieties or fantasies that produce them, and the sorts of steps that might shift them.

A lot of people, myself included, anticipated an apocalypse for the nonprofit sector in the wake of the pandemic-lockdown. But the conservation community, to which I am relatively close, seems to be managing for now. Colleagues, friends, and others report various forms of survival in other segments of the nonprofit world. With all this in mind, two things strike me about how the crisis has played out so far for organizations.

The first is quite plain. Different segments of nonprofits are being impacted differently. Those that depend upon earned income, especially from visitors or audiences, such as arts and culture institutions, have faced enormous and persistent difficulties. Groups reliant on government contracts – social service organizations, for instance – have muddled along for now, but they are likely to face very strong headwinds over the next year or so as governments (especially city governments) make drastic cuts to balance budgets. But for nonprofits that do not depend on earned income or government contracts for critical proportions of their operating revenue – land trusts fit here – the stock market came back, the economy effectively held up, and major donors and foundations have been able to sustain support.

The second point, really more of a question, is broader. It seems fair to say that the strong expectation of disaster back in early spring reflected a deep and collective sense of panic. This reaction showed how extreme fear can drive thinking toward lumping, generalizing, and all-or-nothing absolutes. With more information and time to reflect, we now can think in a more grounded and multi-dimensional fashion. We can differentiate. This leads me to wonder whether extreme fear must always lead directly to building bunkers or launching inquisitions, to the twins of flight or fight.

I would like to think not, that with awareness, with robust group process, we can center ourselves on our common sense, our common decency. But it is true that panic taps dark impulses.

Hope in a Box

I’ve become something of a crazed convert to gardening with native plants in recent years. (To much eye-rolling from my children.) I installed a couple of beds in the local community garden and delighted in the dramatic rise in insect life. This spring I turned my attention to our apartment’s window boxes. Not a lot of square footage there, but among other things, I planted Anise hyssop (Agastache foeniculum – my photo above) to help bees and other insects.

Now, you have to understand just how crazy this was. We’re in a low-floor apartment facing an alley in the back that is ringed by multiple 12-to-14 story buildings. True, slats of morning sunlight slip down the alley for an hour so from the east, and at midday the sun reflects onto the boxes from the mirrored windows of the building to our rear. So stuff grows. But other than the boxes, there is only brick and concrete in our canyon.

Week after week, as the Agastache grew and then bloomed, I glanced hopefully at the box. The daisy came and went. The Black-eyed-Susan began to wither. No insects.

Then, one morning about a week ago, I saw it. A honeybee busied itself about the Agastache’s flower columns. It visited the next day. And the day after that. The season neared its end. Tiny blossoms dried and fell from the columns. The bee returned frequently to gather the last drops of nectar.